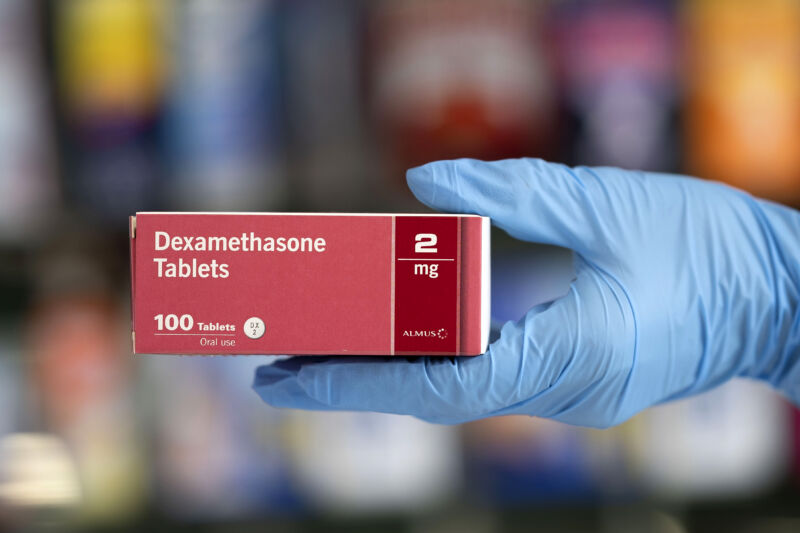 Enlarge / A close-up of a box of Dexamethasone tablets in a pharmacy on June 16, 2020 in Cardiff, United Kingdom.

Researchers at the University of Oxford announced Tuesday that a cheap, readily available steroid drug lowered the risk of death in COVID-19 patients who were enrolled in a randomized clinical trial and required either ventilation or oxygen during their treatment.

If the finding holds up, it would mark the first time in the five-month-old pandemic that researchers have identified a therapeutic that reduces mortality from infections with the novel coronavirus, SARS-CoV-2.

Upon hearing the news Tuesday, many experts were optimistic and excited about the reduction of mortality—and that it came from a drug that would be affordable and easy to deliver to patients all over the world.

But many experts also urged caution, noting that the clinical trial data has not yet been published or reviewed by outside scientists. The Oxford researchers merely announced the news and a small amount of supporting data in a press release.

This has become a frustrating trend during the pandemic, which researchers have repeatedly recommended against. The trial authors noted in the press release that “given the public health importance of these results, we are now working to publish the full details as soon as possible.”

Here’s what we know so far

The unpublished results are from the RECOVERY (Randomised Evaluation of COVid-19 thERapY) trial, a large randomized clinical trial involving more than 11,500 patients at 175 hospitals in the UK. It’s funded by the University of Oxford, UK government grants, and nonprofits and charities, including Wellcome and The Bill and Melinda Gates Foundation.

The trial has multiple treatment arms, meaning that doctors are using the trial to test several potential therapeutics at once. These include the HIV treatment lopinavir-ritonavir, the anti-malaria treatment hydroxychloroquine (which has since been abandoned), the anti-inflammatory tocilizumab, and convalescent plasma.

One of the drugs was dexamethasone, a synthetic corticosteroid known to have anti-inflammatory and immune-suppressing effects and which is able to make its way into the central nervous system. Researchers have hypothesized that such drugs could help with severe cases of COVID-19 because they are thought to involve out-of-control immune responses, as seen in “cytokine storms.” So far, dexamethasone is used to treat a variety of conditions, including shock, multiple sclerosis, allergies, cerebral edema, asthma, and contact dermatitis.

According to the press release, the trial’s dexamethasone arm included a total of 2,104 randomly assigned COVID-19 patients who took a 6-milligram dose of dexamethasone once per day (either by mouth or by intravenous injection) for ten days. The fates of these patients after 28 days were compared to those of 4,321 randomly assigned COVID-19 patients who only received standard care, no experimental treatments.

Among the patients in the standard care group, some percentage of them required ventilation and of those ventilated patients, 41 percent had died after 28 days. Of the standard-care patients who required only oxygen, 25 percent died. There were also patients who did not require any respiratory intervention and, of those, 13 percent died.

Put another way, dexamethasone decreased the risk of death in those ventilated by 35 percent and in those needing oxygen by 20 percent.

The press release hashed this out further, saying, “Based on these results, 1 death would be prevented by treatment of around 8 ventilated patients or around 25 patients requiring oxygen alone.”

The release also included some splashy quotes, unbridled in their excitement:

“Dexamethasone is the first drug to be shown to improve survival in COVID-19. This is an extremely welcome result,” said Peter Horby, professor of emerging infectious diseases at Oxford and one of the chief investigators for the trial. “The survival benefit is clear and large in those patients who are sick enough to require oxygen treatment, so dexamethasone should now become standard of care in these patients. Dexamethasone is inexpensive, on the shelf, and can be used immediately to save lives worldwide.”

Martin Landray, another Oxford research on the trial, added, “These preliminary results from the RECOVERY trial are very clear—dexamethasone reduces the risk of death among patients with severe respiratory complications. COVID-19 is a global disease—it is fantastic that the first treatment demonstrated to reduce mortality is one that is instantly available and affordable worldwide.”

But other experts were not so enthusiastic.

It will be great news if dexamethasone, a cheap steroid, really does cut deaths by 1/3 in ventilated patients with COVID19, but after all the retractions and walk backs, it is unacceptable to tout study results by press release without releasing the paper.

Dr Penny Ward, an expert in pharmaceutical medicine and a visiting professor at King’s College London called the announcement “good news” in a statement but noted:

Clinicians will need to see the detailed results of the trial, particularly those in patients not requiring oxygen therapy/ventilator support, as the breakdown of outcomes by disease stage suggests that the timing for start of steroid use may be relevant to use the treatment most efficiently. That said, for patients going onto a ventilator, good news today.

On Twitter, Nahid Bhadelia, an infectious disease doctor at Boston University, likewise called for the full data to help treating physicians understand which COVID-19 patients would most likely benefit from the treatment and what other standard treatments patients in the trial received. And Jeremy Faust, a Harvard emergency medicine doctor, noted that additional information on outcomes for patients is needed to truly assess the benefits of the drug—not just survival.

Columbia University virologist Angela Rasmussen implored colleagues to release data alongside such announcements in the future: “I urge scientists and physicians—especially those working on studies with implications for clinical practice—to PLEASE not disclose results by press release with no accompanying data,” she wrote on Twitter.

Researchers have discovered that enormous sea scorpions bigger than a human swam the oceans prior to the age of the...

A photographer has snapped a remarkable image of a young lion cub appearing to give a kiss on its mother's...