No Result
View All Result
Home Tech The Space 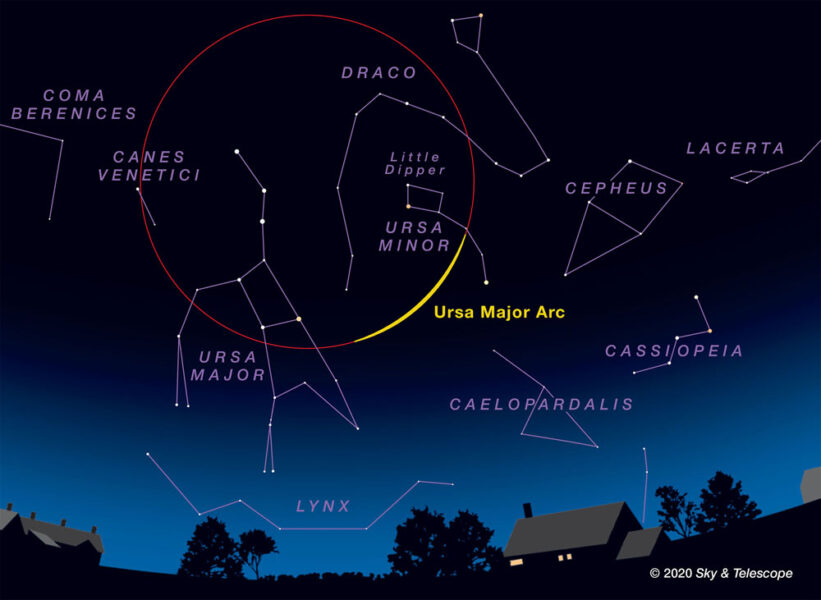 The Ursa Major Arc is roughly 600 light-years away, appearing just outside the bowl of the Big Dipper.
Gregg Dinderman / S&T

An oddly perfect puddle of hydrogen gas lies splashed just outside the bowl of the Big Dipper. Yet even though it spans a third of the northern sky, you’d never see it visually through your telescope.

Ultraviolet and narrowband photography have captured the thin and extremely faint trace of hydrogen gas arcing across 30°. The arc, presented at the recent virtual meeting of the American Astronomical Society, is probably the pristine shockwave expanding from a supernova that occurred some 100,000 years ago, and it’s a record-holder for its sheer size on the sky.

Andrea Bracco (University of Paris) and colleagues came upon the Ursa Major Arc serendipitously when looking through the ultraviolet images archived by NASA’s Galaxy Evolution Explorer (GALEX). They were looking for signs of a straight, 2° filament that had been observed two decades ago — but they found out that that length of gas was less straight than they thought, forming instead a small piece of a much larger whole. The researchers report the arc in the April issue of Astronomy & Astrophysics.

The team found unexpected confirmation of the feature in a hydrogen-alpha survey conducted by amateur astronomers David Mittelman, Dennis di Cicco, and Sean Walker. (The latter two are senior contributing editor and associate editor, respectively, at Sky & Telescope.) Their MDW Sky Survey aims to image the whole sky at 656.3 nanometers, the wavelength of light emitted by ionized hydrogen. In the process, they captured a circular arc, which lines up “pretty much perfectly” with the ultraviolet data, says study coauthor Robert Benjamin (University of Wisconsin, Whitewater).

Benjamin describes the feature as a thin rippling shock typical of supernovae, a curved shockfront that is could be just a piece of a spherical bubble expanding away from a collapsed star at the center. Based on the gas’s interaction with its surroundings, the researchers estimate the arc lies roughly 600 light-years away.

Interestingly, there are two well-known “holes” in interstellar material, termed the Lockman Hole and the Extended Groth Strip, that appear to lie within the bubble. These windows have given astronomers exceptionally unobscured views of intergalactic space. Given that the arc is so perfectly shaped, it’s likely that some other explosive event had already cleared out the area when this supernova shock front passed through it, Benjamin says. Nevertheless, the explosion may have played a role in keeping these windows open.